Wednesday, May 2nd, 2018In Single Event → Screenings: Falling LeavesPart of Program → Youth on the March! The Rise of the Soviet New WavePAST | PROGRAM 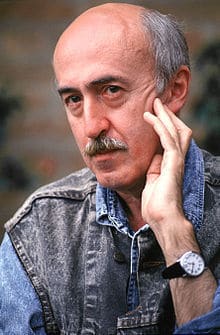 Otar Iosseliani is Georgia’s most celebrated film director and prize winner at Berlin, Venice and a Fipresci prize winner at the Cannes Film Festival for Falling Leaves. A graduate of the Georgian musical conservatory, Iosseliani also studied mathematics, has a passion for poetry, and is an accomplished draftsman. Hypnotic and absorbing, his work lingers on small details – pausing in front of the modest and seemingly irrelevant aspects of humanity to reveal wry wonder at the absurdity of life. If one can find a consistent thread in a career and a personality so multifaceted, it would be his tendency to break rules. Iosseliani’s approach to filmmaking means that he is a complete original.

Related Events in the Program → Youth