With his reputation as the worlds’ most famous revolutionary filmmaker at the end of the silent period fading, Eisenstein was frustrated for nearly a decade in tackling the new medium of sound film.

Alexander Nevsky launched Eisenstein as the prophet of a new kind of operatic cinema. Working closely with Sergei Prokofiev, he created an ultra-patriotic pageant of medieval Rus defeating its Teutonic enemies that became the Soviet Union’s greatest cultural weapon against Nazi Germany. Like Tarkovsky in Andrei Rublev thirty years later, Eisenstein had reached back to a time so little known that he was able to invent a myth free of Soviet clichés. His film would inspire Olivier’s Henry V and many post-war epics set in the chivalric era.

Gabriel Prokofiev is a London-based contemporary composer and DJ. He is also the founder of Nonclassical, a club-night and record label which aims to take classical music out of the concert hall and into the city’s club scene. His compositions, informed by both classical and popular music, have been commissioned and performed by musicians from around the globe. Eisenstein had long been interested in the relationship between sound and image, and in Alexander Nevsky he produced his first sound film, with a score from Sergei Prokofiev. In a series of drawings entitled ‘Thoughts on Music’, Eisenstein attempted to visualise the interplay between the visual and the aural, which he would later explain in an elaborate diagram produced for his book The Film Sense. Both elements, he believed, should exist in a new kind of ‘audiovisual counterpoint’, reinterpreting the principles of montage. Wartime radio gave us the rare opportunity to hear Eisenstein speaking in English, when he broadcast to ‘Brother Jews of the world’ on 3 July 1941, five months before the Japanese attack on Pearl Harbour precipitated America’s entry into World War Two. But his indirect contribution to the war effort through radio has been largely ignored. On 8 Dec, the BBC broadcast a play based on Alexander Nevsky, written by the poet Louis MacNeice and using Prokofiev’s music for the film. By extraordinary coincidence, that long-planned live transmission took place on the day after news of Pearl Harbour reached Europe; and just as improbably it was recorded, so that we have the final words of the Soviet ambass-ador, Ivan Maisky, saying ‘and now Alexander Nevsky’, before the familiar ominous rasp of Prokofiev’s score.

The background to this extraordinary conjunction lay in the pioneering enthusiasm of the play’s commissioning producer, Dallas Bower (below). Bower had been an early radio specialist and sound recordist for cinema, working on both of Britain’s first ‘talkies’, Hitchcock’s Blackmail and Under the Greenwood Tree, in 1929. He wrote a book about the potential for cinema to incorporate sound, colour and stereoscopy as early as 1934 (Plan for Cinema), in terms very similar to Eisenstein’s own vision in his 1947 essay ‘On Stereo-cinema’. Bower worked in the BBC’s experimental television service in 1937-8, and as a member of the Film Society managed to see Alexander Nevsky when it reached Britain shortly before the war. When he was drafted into radio after the television service was suspended, he proposed the idea of its subject offering ‘fine material for a feature (one hour)’ for the BBC’s main Home Service.

Louis MacNeice was already working for the BBC when Bower invited him to write a play based on the film, of which there was only one unsubtitled copy in Britain; and we know form the production files that there was anxiety about the script being ready in time. Meanwhile, Prokofiev’s score had apparently been brought in via the Arctic convoys that were helping to supply Russia, and Sir Adrian Boult was keen to conduct it. Robert Donat, then at the height of his fame as a screen actor, played Nevsky, with Peggy Ashcroft among what the Radio Times described as a ‘star cast’ for this account of ‘a Russian hero of seven hundred years ago who defeated an invasion of his country by the Teutonic knights’.

By all accounts, the broadcast was considered a great success, and the play was repeated, with a different cast, at least twice more during the war, with MacNeice and Bower collaborating again on a second radio drama, Christopher Columbus, broadcast on 12 October 1942, to commemorate the 450th anniversary of the discovery of America. Laurence Olivier headed the cast, and this may well have helped Bower progress his next project, which was to produce a British equivalent to Eisenstein’s Nevsky, which would eventually become the Two Cities colour production of Shakespeare’s Henry V, starring and directed by Olivier, released in November 1944. 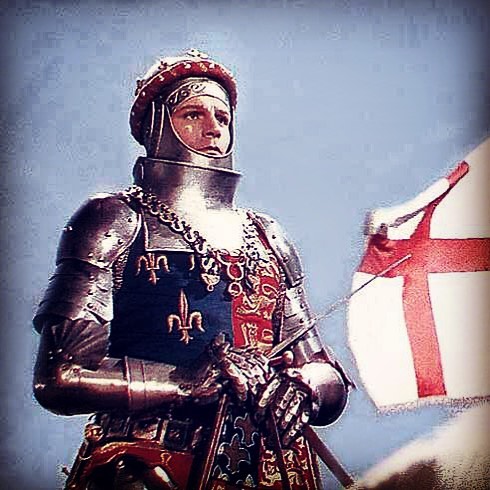 We don’t know if Eisenstein ever saw Olivier’s film, or knew about the radio Nevsky, but a 1945 letter to him from Ivor Montagu analysed the debt it owed to Nevsky: ‘the main thing of interest… is that it brilliantly, triumphantly brings off the picturing of a play (and a well-worthwhile classical play at that), using the lines as instructive basis, and exploiting and inventing all technical means to illuminate and heighten them’. He adds, ‘I am convinced that the great thing imbibed by Bower is the high standard of research, the delight in costumes, textures, period faces, which is all of a standard of historical realism, not mechanically reproduced but creatively selected, quite outside the tradition of the American or British historical film, which he can only have got from Nevsky’.